Cleaners on the frontline - Coronavirus 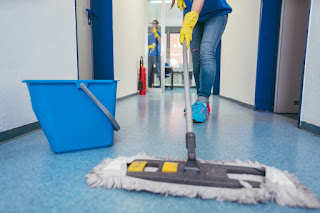 They don’t usually get much thought or attention – but there isn’t a single list of essential workers doing the rounds that doesn’t include cleaners. Suddenly they find themselves on the front line of the worst disease outbreak in a century.

Their task, always vital, has taken on whole new levels of urgency in recent weeks, often in challenging circumstances. UNISON members report a wide variety of challenges that cleaners and domestics are dealing with, during the Coronavirus crisis in order that hospitals and care facilities can continue to function.

The struggle to keep places clean has intensified. Many places are now working flat out 24/7 – and rotas are having to be shifted to take account of that. More shifts and less rest are being demanded. Added to that is that the cleaners, like everyone else have families, have health conditions and can also catch the virus – so the numbers available for work are down as people self isolate, meaning this greater workload is being handled by fewer people. Some authorities are engaged in an effort to recruit and get more cleaners into the workplace – this is welcome and these efforts need to be stepped up.

It’s not just the workload of course – it’s the fear. A natural worry about being exposed to the virus is hugely increased by lack of information. Some have not been told when they have gone into rooms of patients with suspected CV. While changes and developments are made clear to medical staff – its often the case that these aren’t explained to the cleaners.

In addition to this, particularly in larger facilities, cleaners are finding themselves deployed not in their usual areas – but anywhere they are needed. This in an environment where CV patients are being treated in many different places in the hospital. This is a particular issue at night where they will find themselves being bleeped to go anywhere in the building.  They worry they are going into places which are high risk, but which they haven’t been told about.

We were told by one member – who, like many cleaners, has two jobs. One of these jobs is in an environment much more concerned with treating virus patients than the other. She prefers going into the more virus facing job than the other because she is kept up to speed with what is happening there.
Cleaners – by definition , aren’t working at home. They need to travel to work just like other essential workers. Some, particularly outside the bigger cities are impacted on by the lockdown. Cleaners are low-paid workers and many are completely reliant on public transport. As bus services have been cut back there are many instances of this, mostly female, workforce finding that the early bus bringing them to work, or the late bus taking them home, are no longer running. Making an already difficult situation worse.

Without cleaners – none of the institutions and facilities we are relying on to contain the virus and keep the infected alive could function. They deserve respect, resources and reward – they are the front line.

Posted by UNISON Scotland at 16:27