Audit Scotland has published a report on the creation of a single fire and rescue service for Scotland. They conclude that the process was managed effectively, and its performance is improving.  However, a long-term financial strategy is now urgently needed to address a significant potential funding gap.


The key financial concerns are: 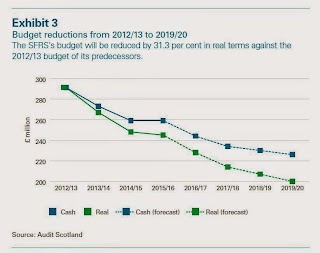 Staff costs amount to 79% (£207 million) of budgeted gross expenditure. The support staff represented by UNISON Scotland makes up only 9%.


On future savings, Audit Scotland calculates gross savings of £55.3 million by 31 March 2020. However these will be offset by cost increases (inflation, increase in employers' national insurance costs etc) of £32.4 million, resulting in net savings of £22.9 million. The SFRS cost plan assumes that budgets will remain at the same level as 2015/16 until 2019/20, while recognising that a decrease in funding of 5% by 2019/20 would result in a funding gap exceeding £21 million. 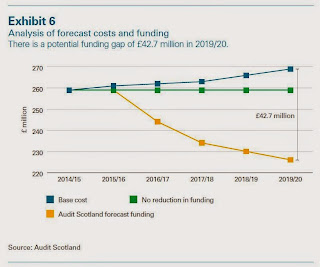 In this context they recommend a long-term financial strategy is needed for the SFRS, to show how it will close the funding gap and achieve savings by 2019/20 and beyond.


The funding shortfall is exacerbated by the SFRS’s liability for VAT. UNISON Scotland warned the Scottish Government of this risk and they were explicitly warned by the Treasury that if they chose to organise Fire and Rescue services in this way they would lose the previous VAT exemption. Sadly, Scottish Ministers ignored this warning and scarce resources are now going to the Treasury.

Email ThisBlogThis!Share to TwitterShare to FacebookShare to Pinterest
Labels: Fire and Rescue

What's coming our way with a new Tory government

As the Tories form a government at Westminster what are the issues likely to face Scotland and trade unions in particular? There are many, but the key issues are likely to be public spending, welfare, employment rights and the constitution

The key issue for any devolved administration is funding. We know from the budget that the Chancellor’s plans involve slashing £30bn from UK public spending with the deepest cuts in 2016/17 and 2017/18, as this chart shows.

What does this mean for spending in Scotland? As always it's difficult to be precise because we don't know exactly where the cuts will be made in England and therefore the Barnett consequentials. The Budget stated that £13bn will come from departmental budgets, £12bn from welfare cuts and the £5bn balance from tax avoidance savings.

It's the department budgets that have the direct Barnett consequentials and that might be mitigated a bit if they deliver on the promised cash input into the English NHS. We still don't know where the welfare cuts are coming from and I suspect the tax avoidance savings are very unlikely to be delivered. Particularly as they are cutting HMRC staff! There is therefore a real risk that departmental budgets will have to take a greater share of the cuts with negative Barnett consequentials.

Cuts at this level will require more than the salami slicing approach of recent years. Will the Scottish Government continue to dump most of austerity on local government and if so where does that leave policies like the Council Tax freeze. While I have no doubt the Scottish Government will do what it can to mitigate, we all need to start thinking outside the box for some creative solutions. The Smith Commission borrowing powers, while not all we would want, may be one opportunity to look at issues like refinancing expensive debt and PPP schemes.

Closely linked to spending is pay policy. Pay restraint is likely to continue and next April there will be National Insurance contribution increases that will take a further 1.4% out of the pay packets of workers in contracted out pension schemes. That's most of the public sector. It will also hit public sector budgets as employer contributions will rise by a massive 3.4%. None of this will do much for spending power in the economy - continuing the low wage, low productivity problem that underpins much of our economic woes.

While the Tories refused to spell out where they would cut benefits to achieve their spending cuts, it is clear that they will largely come from the working poor. This will be a further attack on incomes, particularly for low paid workers with families. Some 250,000 in-work families who currently receive Child Tax Credits (CTC) and Working Tax Credits (WTC) face a potential threat of £40 per week on average being cut from their weekly incomes.

There will be a further attack on employment rights that are already some of the weakest in Europe. Industrial action thresholds are designed to undermine the right to strike and employers will be allowed to bring agency staff to scab. I fear there will unforeseen consequences of this with many more small scale disputes where the threshold is usually met, coupled with new forms of unregulated protest. Talk of deregulation from the new Business Secretary is code for further attacks on workers rights and undermining basic protections such as health and safety. On a more positive note there will be an opportunity to address the pernicious impact of Employment Tribunal fees when this is devolved under the Smith Commission proposals.

This is another reason why the Human Rights Act is under attack. The Tories don't want their legislation to be challenged. There is an interesting and developing debate on how this sits with the Scotland Act requirements and what we might be able to do to resist this. It's complex and probably the subject of a separate post, but that Tory champion of human rights, Winston Churchill, will be turning in his grave.

While there is a commitment to implement the Smith Commission proposals, that won't be the end of the constitutional story. As a Scottish Parliament committee highlighted this week, the legislative proposals fall somewhat short of the recommendations and others need more clarity. There will be additional pressure to improve on Smith as reflected in the STUC Memorandum of Understanding with the Scottish Government this week.

There will be a temptation for the UK government to call the Scottish Government's bluff on Full Fiscal Responsibility, although I suspect Treasury orthodoxy will triumph over political opportunity. We must hope so, not just because of the negative public spending consequences, but because creating a UK version of the Eurozone's fiscal and monetary policy mismatch won't help the economy.

The above demonstrates that the next few years will be pretty grim for everyone in Scotland and the rest of the UK, with the obvious exception of the rich, who will be pampered as usual. Devolution brings some opportunities to mitigate the damage in Scotland and so we all need to work together constructively to exploit that potential.