If we put communities and trade unions at the center of decision making then moving to a green economy can be achieved without the destruction of livelihoods and communities seen in past technological change.

A new report by the TUC based on research by the New Economics Foundation examines how we could manage a fair transition by looking three case studies of industrial change: Bilbao, Eindhoven and Iceland. The report then makes  recommendations for how Britain can manage the transition to a green economy while maintaining communities and improving livelihoods. 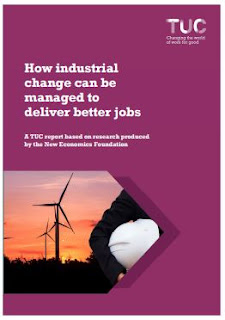 
Recommendations for the UK

By taking positive action to improve lives and created well paid secure jobs we can transform our economy and avoid a climate catastrophe. This will not happen without an active state working at all levels with trade unions and communities. Without this we will repeat the mistakes of past which saw communities devastated by the closure of local industries.

Scotland needs to avoid the mistakes made in England as we move towards increased  Early Learning and Childcare hours. Without pay that reflects the skills needed to do the work and appropriate funding the expansion will not work. And we know which children will suffer most from shortages of spaces.

A new report by the All Party Parliamentary Group for Childcare and Early Education highlights a range of problems in England not least of which is the fact that the better-off have benefit much more than those on lower incomes.

The system sees the expansion take place outside the public sector which has led to an expansion in wealthier areas where parent can afford to pay to top up the funding for the “free hours”. The research indicates that 17% of providers in deprived areas “anticipate closure in the next 12 months” compared to only 8% in affluent areas. 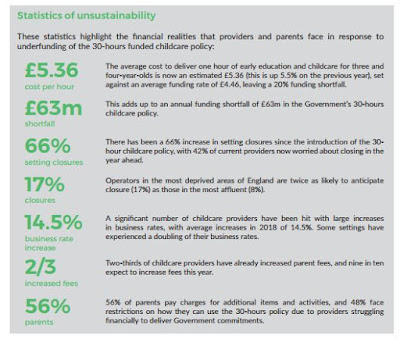 More significantly, for us in UNISON, the report highlights the effects low pay creating difficulties retaining staff in the sector. The early years workforce is  highly skilled but poorly paid. Even the promise of the Scottish Living wage, which is well below public sector pay rates, will not be enough to recruit and retain staff when other jobs offer the same pay but without the high levels of responsibility, stress and ongoing professional development required.

In England the average hourly pay was £8.20 an hour: about 40% less than the average female worker. The picture will no doubt be similar here as (outwith the public sector) workers without management roles are generally paid the legal minimum wage for their age.

The Scottish government need 1000s of workers to train up in order to deliverer the promised expansion. Yet they are only promising the Scottish Living Wage to those they are trying to attract. The report shows that low pay is one of the main drivers of childcare workers leaving the sector.
25% of respondents are considering leaving the sector due to stress or mental health difficulties. Heavy workloads, administration and paperwork and the financial resources and of course pay were the top four sources of stress.

Retail jobs are the main competition for staff.The pay is similar and while not an easy job does not have the responsibilities for children's development and health and well-being that early years work includes.  It's therefore no surprise that nurseries report difficulties recruiting and retaining qualified staff. Local authorities,also pay substantially better wages and will struggle less to retain staff than the low paying sectors as the expansion goes forward in Scotland. That will be small comfort to parents who cannot get a place for their children in a nursery due to lack of places.

Across the UK governments are attempting to expand childcare. It will not work without the investment to train and to pay the staff a wage that reflects their skills and responsibilities.