Please do not be quiet! The campaign to Save Scottish Borders School Libraries.


Thanks to Greig Kelbie for this "guest" blog

UNISON Scottish Borders Public Services branch is the midst of running a campaign against the local authority’s pilot scheme underway at Galashiels, Peebles and Kelso High Schools, which has seen pupils, volunteers and self-service scanning machines working in lieu of librarians.


Scottish Borders Council argues that the libraries pilot scheme is a result of budget cuts imposed on the council, that libraries will not be staff-free zones, and that the project is a result of pupil consultation. Several librarians lost their jobs last year, with less senior staff taking over from them. Neither the staff, UNISON or members of the public have seen any evidence of pupil consultation findings.

UNISON, professional bodies representing Scotland’s librarians, politicians, parents groups and education officials have all lined up to criticise the scheme. Despite this, the council has stayed the course and self-service checkouts have begun to appear in school libraries as part of a pilot project, which may lead to a roll out across all of the region’s schools, pending a full review of the pilot scheduled for April 2019. 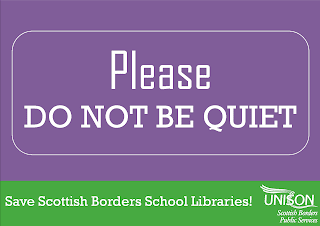 We turned up the heat on our campaign. UNISON visited each of the region’s high schools and canvassed parents, pupils and members of the community on their opinions on the scheme. We did this over 19th – 25th November, which was planned to be aligned with Book Week Scotland, the theme of which was Rebel. UNISON Scottish used this opportunity will be ‘rebel’ by campaigning throughout this week across the schools to raise awareness of the detrimental impact this staffing loss could have on our children. We were asking pupils, parents and staff to sign campaign postcards, letters to local councillors, engage with our online materials such as the petition.

We were overwhelmed by the support of hundreds of members of the Scottish Borders communities who refused to be quiet and backed our campaign. From the hundreds of people we spoke to, there were three reoccurring clear issues that were continually brought up: concerns over support for children with additional support needs, the inability for children to receive support and guidance during independent study, and several testimonials which claim the pilot libraries have become disruptive and chaotic without a member of staff there to staff the library.

A recently produced Scottish Government strategy report for school libraries (‘The National Strategy for School Libraries’) states that ‘school libraries are a hub of activity, with library staff supporting a range of creative approaches to learning, addressing issues related to health and wellbeing, and facilitating connections between pupils across the school community. It is clear to us, that the Council is failing to adhere to this strategy.


What is also clear to us, is that not one single person supports the council’s pilot. More than 400 pupils, parents and concerned members of the community have written messages on our campaign postcards about the importance of librarians and almost 1000 people have signed our online petition demanding that the pilot should be dropped.
Where are we now...

On Thursday 29th November, the branch lobbied the full council meeting. We created a booklet “The Views of the People”, which contains a message to Councillors and full of some of the best testimonials from our postcard signings. We attempted to deliver our postcards to Tory Council Leader, Shona Haslam. Unfortunately, the Council Leader avoided the UNISON delegation. However, we had them delivered straight to her office. We will now be formally be writing to the Council Leader to ask for a meeting to discuss further.

How Councils Get Their Money

Can’t tell your NDR from your GRG? Then help is at hand. In plenty of time for this year’s budget, on December 12th, the Scottish parliament’s information team have produced a guide to local government finance. It will help non-finance professionals understand how much money local authorities have to spend, the various sources of that money and how it is distributed across authorities.

First things first: NDR is Non Domestic Rates, frequently referred to as business rates and GRG is General Resource Grant. This is the money that the Scottish government allocates to local authorities. GRG is the bulk of local authority budgets.

The guide covers revenue spending: the money that pays for the day-to-day running of services. The funding provided for capital (building things) and any money borrowed are not included in the guide. 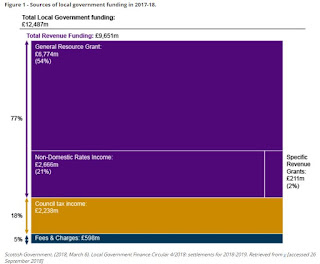 The guide covers both the money from Scottish government and via local taxes and charges. This includes non domestic rates and council tax. So you can read about how the GRG is arrived at. Which is via "discussions" with COSLA followed by calculation of individual council allocations using “Estimated Service Expenditure" and "Total Estimated Expenditure". On top of those calculations there are “funding floors”. Working out estimated service expenditure involved Grant Aided Expenditure (GAE) which is a “needs based” calculation. Needs based means that is should take account of the relative needs of the populations of each local authority including for example relative poverty rates. Handily there is also more detail on what "Estimated Service Expenditure" etc mean.

Lack of well written papers on the complexities on local government finance make it harder for people to participate in discussions and campaign against cuts to local government budgets. Even a quick read of the two page executive summary will help those trying to make sense of the debate round cuts and service funding. Taking the time to read the full paper would be time well spent.
Posted by Kay S at 12:22 No comments: