Why the robot workplace damages workers and their organisations

Obsessive and unnecessary recording and reporting at work increases costs and places undue stress on staff. Coupled with new monitoring systems, workers are being turned into robots, before they are actually replaced by them.

Two different discussions with members, one private sector employer and another in an NDPB (quango), highlighted for me the waste that can develop when employers allow reporting systems to spiral out of control.

The story was similar in both organisations. Workers told me that they spend a quarter and a third of their time providing reports on what they are doing, in different formats, to different parts of the management structure. The main departments responsible for generating these reporting demands have grown exponentially, while front line staff are under huge pressure, coping with increased demands on delivering the service. 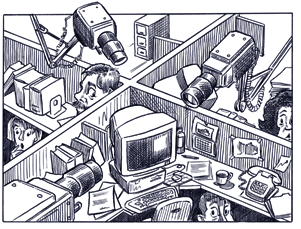 What particularly irritates staff in the NDPB, is that they take the same data and have to input it into the computer system and then put parts of the same data into two different spreadsheets. There is no smart systems working, or any indication that management have any insight into the waste this approach causes.

Looking at the annual reports of both organisations, I can see no qualitative evidence that all this reporting has had any noticeable impact on their public reporting. It is a regular feature of Audit Scotland reports that there is insufficient data to judge this and that. In the public sector this is sometimes used as an excuse for expanding data collection. It's a point we often make in response to Audit Scotland reports and something they ought to reflect on.

Taking this one step further, we have John Harris in the Guardian writing about a novel and new film on the fictional (for now) Circle Corporation, whose leaders want privacy and autonomy to count for almost nothing. Workers are under constant monitoring and a system of endless appraisal by their peers, who feed into a system called Participation Rank – or PartiRank, for short.

The details of their online and offline lives are judged according to “an algorithim-generated number” that measures their activity. “It’s just for fun,” a company high heidyin tells the story’s principal character. But, of course, it isn’t, it's just one more example of the passive-aggressive ways of Silicon Valley that appears to be spreading to Scotland.

Both my examples involve administrative jobs. However, similar intrusive work monitoring takes place in the huge warehouses run by online retail giants, and driver deliveries. Sports Direct and Amazon are well known examples, and there was a story last week that one in ten workers in another retail warehouse had been so ill that they had to be sent to A&E.

I have long been irritated at the use of the phrase 'human capital'. It's as if HR departments feel they need some numbers to put them on a par with the finance department. Even I had a phone call the other day from a company wondering why I hadn't taken up their invitation to 'get on board' with the 'science' of HR metrics. After a five minute lecture from me about the difference between people and robots, they probably regretted the call! I see one company is trying to sell robots to undertake care tasks. I am sure our long suffering elderly care service users, just can't wait for this quality interaction!

The latest buzz highlighted by Harris is 'people analytics'. Some systems are straightforwardly intrusive: Worksnaps, takes repeated screenshots of workers’ computers, count their mouse-clicks and take webcam images. BetterWorks uses a Facebook-like application that depends on employees publicly posting their supposed workplace goals, and regularly issuing “cheers” and “nudges” to their colleagues. “In the office of the future,” says the chief executive of the company responsible, “you will always know what you are doing and how fast you are doing it". I can't wait!

There are now tracking apps for phones that can log the whereabouts of staff 24 hours a day. A US-based company called Humanyze (really!) is working with British businesses including a high street bank and the consulting firm Deloitte, as well as parts of the NHS. They say: “Humanyze’s badge can track physical activities in real time, capture ‘nonlinguistic social signals such as interest and excitement’ without recording actual words, locate wearers and their proximity to other wearers, and communicate with other electronic devices.”

Harris concludes: "Judging by the way the idea is sold, the people responsible, for reasons that speak volumes about the tech world’s endless naivety, they see it as a kind of super-efficient utopia. Anyone with a grasp of what makes us human should surely recognise it for what it is: Stasi capitalism, apparently furthering its dominance at a terrifying speed, with only the faintest murmurs of protest."

There is another way for those employers who recognise that their workforce consists of diverse talented individuals who want to do a good job. A study by the ILM has found that more than half (53%) of employees would consider leaving their job if the structure and culture of their organisation didn't change. According to the research, lack of employee empowerment is the root cause of much dissatisfaction in the workplace.

Nearly three-quarters (74%) of staff surveyed said they wanted more freedom in their roles, but a third (34%) said their work was overly regulated, and that they were forced to work within overly controlled structures. 64% of staff surveyed said they struggled to do 'fit in' with their organisation. Despite two-thirds (66%) of employees wanting to have a greater say in their everyday working lives, just 24% said they felt their line managers fostered collaboration.

John Yates, group director at ILM, said overly authoritarian workplaces should be “a thing of the past, people today want to work for flexible, fun and friendly organisations. Organisations need to be flexible, allowing employees to pursue career ambitions and manage conflicting home life pressures as much as possible, and encourage creativity – injecting passion and new ideas into the workplace.”

I can think of a growing number of organisations that need to recognise this and change their systems, behaviours and culture - urgently!
Posted by Dave Watson at 18:01 No comments: