As the local government election short campaign gets under way – let’s keep it local.

Local government elections will be held for every seat in Scotland on Thursday 4 May. The first reminder is to make sure you are registered to vote. Changes to the system means that a lot of people have been missing from the register. If you haven’t received a polling card by now, you are probably not registered. It’s easy to do this online at https://www.gov.uk/register-to-vote, but it has to be completed by 17 April.

The second reminder is that these are local elections. The councillor you elect will make important decisions about local services including schools, social care, roads, libraries and much more. While I am not naive enough to believe that national issues don’t impact on local elections, I get very irritated when leaflets arrive through the door with the local issues relegated to an afterthought. – I bin them.

UNISON Scotland has published its manifesto for the election. There are some general themes around fair funding and the importance of keeping services local, as well as more detailed ideas around individual services. We will be highlighting some of these, and the people who deliver them, during the campaign because we all tend to take these services for granted. 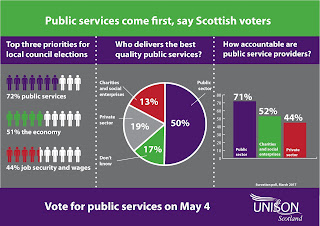 That’s a clear message to council candidates from all parties that people in Scotland want high quality services, delivered by public sector staff. That doesn’t preclude other service providers, but in-house staff should be the primary means of delivering public services that are accountable to the public.


There was also support for keeping services local, with the council being the most trusted deliverer of local services. Voters also wanted more of their taxes spent locally. They also recognised that the cuts have had a serious impact on the quality of public services. Hardly surprising when nine out of ten jobs lost in Scotland’s public sector since the austerity cuts have gone from local government. 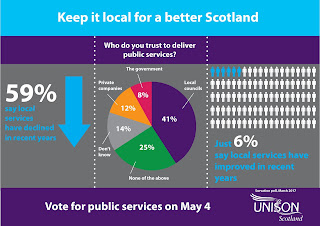 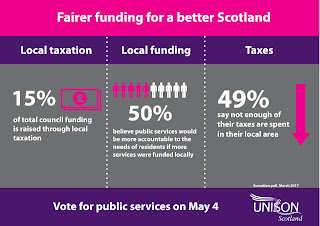 We will be providing some useful questions for candidates in the coming weeks. So if a candidate chaps on the door - start by asking them, not what they have been told to say by central office, but how they will be standing up for local services. Keep it local.
Posted by Dave Watson at 10:24 No comments: