There just isn't enough money in the local government budget to meet the needs of our citizens. Last week's budget debate focused on the big numbers and the now annual smoke and mirrors routine claiming a good deal for local government. The annual benchmark report shows exactly what's happening to funding for individual services. This is more of a horror story. 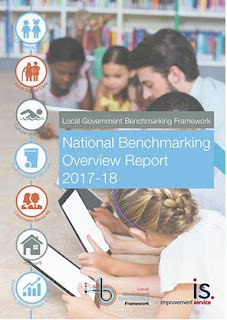 Total revenue funding for councils has fallen by 8% in real terms across the 8 years the report focuses on. Spending on teacher numbers and social care has been relatively protected. Education and social care make up 70% of expenditure within the bench-marking framework so this means substantial cuts have had to fall on other areas.

The education budget has reduced by 2.5% since 2010/11 but the number of primary school pupils and pre-school registrations has increased by 30,000. So it doesn't take a degree in accountancy to see that is a big cut in the money available for each pupil. The numbers people tell us that total spending on primary and secondary education has grown in cash terms the real spend per pupil has fallen since 2010/11. (8% for primary and 4% for secondary) It will come as no surprise that satisfaction with schools has fallen for the sixth year in a row.

Total social care spending has grown by 10% since 2010/11 although spending on home and residential care for older people has fallen as a percentage of that total.
Although the number of hours of home care has been relatively static spending on home care has risen by 15% since 2010/11. Much of this will be due to moving towards paying staff teh living wage. Spending on residential care has fallen by over 12% although the number of residents has only fallen by 2%.

Culture and leisure services have seen substantial increases in demand alongside a 22% spending cut. Sports facilities have increased visitor numbers by 19% , libraries by 36% and museums by 29% over the period analysed. Numbers have fallen over the last year though. Perhaps a reflection on the impact of budget cuts? Spending on parks has also reduced by 5% . Public satisfaction rates have fallen for all culture and leisure services in the last 12 months.

Despite the direct importance of these services to the health and safety of citizens real spending has reduced by 10%. Waste management has been cut by 3% and street cleaning by a massive 27%. Preventive services like trading standards and environmental health have been cut by 18%. Spending on roads has fallen by 15%.

There is no doubt that local government has experienced substantial cuts to its budget and ability to deliver services to the public.UNISON's Damage reports allow you to hear directly from the staff about the impact of these cuts. They are available here