In the flurry of post-Brexit excitement it was welcome to hear the First Minister remind Parliament that it must not distract from the business of government. Indeed the Deputy First Minister started the process of public service reform with the publication of his Education Delivery Plan.

I spent yesterday in Edinburgh at the Holyrood conference on public service reform with a focus on how the Christie Commission report has been implemented in the five years since its publication.

My own contribution largely set the scene, starting with the challenges facing public services in Scotland today. They are remarkably similar to those identified by Christie, although if anything even greater. Austerity cuts have gone on longer than Christie predicted, largely because of the failure of austerity economics - creating the longest recovery from recession on record. Austerity cuts have not been equally applied with local government bearing the brunt of cuts. I also showed that NHS spending is perhaps not as encouraging as headline figures imply.

Scotland’s deep-seated inequalities remain largely untouched and recession has hit the most vulnerable hardest. Demographic change has only partially been alleviated by increased migration and even that is under threat by Brexit.

Christie had much to say about the role of the public service workforce in delivering reform. However, with 31,000 fewer devolved jobs, 87% of them coming from local government, the capacity to contribute is massively reduced. As UNISON and other surveys show, a demoralised, ageing workforce has been largely forced to abandon the preventative work Christie promoted. Instead, reverting to the statutory minimum, and sometimes not even that.

Of the main Christie recommendations, conference participants felt that progress had been limited.

On Outcomes, we have a nice website and some fine statements of policy intent, but politicians still emphasise inputs. As the Head of CIPFA pointed out, the main SNP manifesto commitments were on spending or staff numbers, without any explicit link to outcomes. A fault not limited to the SNP!

There remains considerable support for the concept of preventive spending. There was a decent case study from the Fire and Rescue service where fire prevention has reduced fires by 40%. However, generally there was frustration over the barriers to preventative spending. Most obviously, that spending in one area might reduce the demand on another without giving any credit to the originating budget holder. The silos that Christie sought to bring down are very much in place.

It’s not that the ideas are not out there. A good example of this is a paper on preconception care written by Dr Jonathan Sher. Christie highlighted the importance of early intervention and this research shows us a way ahead.

Another Christie recommendation was for greater public service integration. Efforts are being made to achieve this in the key health and care field, but there is considerable scepticism that this will work. There are some good examples of progress out there and we heard from the Youth Talk initiative in Edinburgh that not only brought services together, but also is an excellent example of the bottom up service design Christie championed.

I pointed to some themes of public service reform, most of which have championed centralisation and ministerial direction over the principles set out in Christie. The Deputy First Minister’s Education Delivery Plan, launched yesterday, sadly risks looking like more of the same. When ministers are in government for a long time, the temptation to grasp the levers of change and direct from the centre is strong. However, as friend who worked in Tony Blair’s Delivery Unit reminded me recently, it just doesn’t work.

COSLA President David O’Neil made a strong case for local democracy, which is right in principle. However, we need to develop this further into practical ideas that can deliver better-integrated services that focus on delivering positive outcomes and preventing poor ones. It is easy to find fault in government plans, but it is more constructive to develop workable alternatives, before the latest avalanche of directives, targets and inspectors roll all over local innovation.

In a country the size of Scotland it is reasonable to have common national standards, data and staff governance provisions. Local services can then be integrated in real communities of place, without the bureaucracy and fragmentation that localism can create. There is a halfway house between centralism and localism, but it needs to be developed. 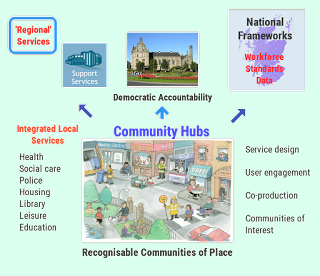 Five years on from the Christie Commission, we may not have delivered a focus on outcomes, prevention, integration and engagement; but they remain the principles that should underpin reform. The challenges facing public services are even greater today, so we should make a greater effort to find workable solutions.
Posted by Dave Watson at 15:32 No comments:

Employment Tribunal fees have had a "significant adverse impact on access to justice for meritorious claims”.
That is the conclusion of the House of Commons’ Justice Committee report into the impact of employment tribunal fees on access to justice for workers. The committee found that the introduction of issue fees and hearing fees for claimants in employment tribunals in July 2013 has led to a drop of almost 70% in the number of cases brought.
Fees were introduced in 2013 in two bands. Band A includes claims for unpaid wages, redundancy pay and breach of contract; the claim fee is £160 and the hearing fee is £230. Band B includes all other claims, such as unfair dismissal, discrimination and whistleblowing; the claim fee is £250 and the hearing fee is £950.
When average earnings are taken into account these fees are substantial and prohibit most workers from bringing a claim. A recent Citizens Advice survey found that 47% of people would have to save up all their discretionary income for six months to be able to bring a band B claim, and 82 per cent were put off bringing a claim at all because of the level of fees.
Statistics provided by the TUC and UNISON comparing cases brought in the first three months of 2013 and 2015 showed the following reductions in the number of cases for the most common types of claims: Working Time Directive, down 78%; unauthorised deductions from wages, down 56%; unfair dismissal, down 72%; equal pay, down 58%; breach of contract, down 75%, and sex discrimination, down 68%. The Discrimination Law Association argued that reduced access to tribunals had fallen disproportionately on women and those from traditionally disadvantaged groups. Rosalind Bragg of Maternity Action said that since fees had been introduced there had been a 40% drop in claims for pregnancy-related detriment or dismissal.
The Committee was highly critical of the quality of research before fees were introduced. This reflects the views of senior members of the judiciary and the Bar. The Ministry of Justice's long delay in publishing their own review was also criticised and the Committee called on the MoJ to publish the factual information immediately.
Wrongly in our view, the Committee has no objection to the principle of charging fees to court users. The question for them is what is an acceptable amount to charge and the priority must always be access to justice. Committee Chair Bob Neill MP said: "Where there is conflict between the objectives of achieving full cost recovery and preserving access to justice, the latter must prevail."
The Committee therefore recommends that the fees should be reduced and it is clearly their intention that the reduction should be substantial. The report suggests that the current fee regime should be replaced with either a low single fee or a fee calculated as a proportion of the amount claimed. They also recommend that the thresholds for fee remissions are increased to enable more households to benefit from them.
The report is somewhat academic in Scotland, as fees are being devolved and the Scottish Government is committed to ending them. However, it confirms many of the criticisms made by UNISON that formed the basis for our legal action against ET fees.
Posted by Dave Watson at 13:20 No comments: