Good news for hopes of ramping up the ambition in Scotland's new Climate Bill. Scottish Labour has today backed a net zero target by 2050 at the latest.


This is what the Stop Climate Chaos Scotland coalition has been pushing for. The Scottish Government is only committed to a 90% emissions reduction target by 2050, so Labour is going the extra 10%. And the party is backing a 77% 2030 target.

UNISON is a member of the JTP and of Stop Climate Chaos Scotland. If you haven't already, please support the SCCS E-Action, calling on MSPs to improve the Bill so we can end Scotland's contribution to climate change within a generation.


Here are the press releases from the STUC and SCCS, including the full comments from Dave Moxham, and a welcome from SCCS. The Labour press release is copied below.


Welcoming Scottish Labour’s commitment to put a Just Transition at the heart of their plans to tackle climate change, Dave Moxham, Deputy General Secretary of the Scottish Trades Union Congress (STUC) and co-chair of the Just Transition Partnership, said:


“Scotland’s trade unions are clear that tackling climate change is a moral imperative and Scotland must play its part in reducing emissions.  However, targets must not be met at the expense of the workforce and communities which currently extract or depend on the use of fossil fuels. That is why a Just Transition for workers and communities is so important.


“A statutory Just Transition Commission, involving workers with real frontline experience in the development of a proper industrial strategy, offers the opportunity to reduce emissions while creating new, good quality jobs and benefiting communities across Scotland.”


“It’s great to see Scottish Labour back calls for the upcoming Climate Change Bill to include a target to end Scotland’s contribution to climate change by 2050 at the latest and increased action over the next decade.  It’s now up to all parties in the Scottish Parliament to come together, as they did in 2009, to ensure we continue to be amongst the world leading nations in tackling climate change.


“Labour’s commitment to a Just Transition Commission in the Bill is also to be welcomed. Such a commission would ensure that the transition to a zero-carbon economy supports workers and communities, and creates new, green jobs.


“No country on earth will be left untouched by the worsening consequences of a failure to move fast. While we’ve enjoyed a period of record warm weather; the extremes of heat experienced around the world this year and over recent years can mean increased mortality, drought, fire, hunger and crop failure. We have all the solutions we need now to get us on the right pathway. Good policies to tackle climate change can help us avoid the worst impacts, but also bring new jobs, cleaner air, and reduced burdens on our NHS. MSPs of all parties need to act together so Scotland can play its part and enjoy all those benefits.”


This plan is in contrast with the Scottish Government, who propose reducing emissions by 90% by 2050.


Labour proposes a pathway to zero emissions with interim targets of a 56% reduction of greenhouse gas emissions by 2020, and 77% by 2030, supported by a Just Transition Commission.


Launching the policy at the BRE Innovation Park at Ravenscraig, Claudia Beamish MSP, Shadow Cabinet Secretary for Climate Change, Environment and Land Reform will say that it is an “immensely important instrument for Scotland’s future and our standing in the global community.”


The BRE Innovation Park, situated on the site of the former Ravenscraig Steel works, showcases bold inclusive future opportunities with its full-scale demonstration buildings displaying innovative design, materials and technologies for low carbon living. BRE engages with New College Lanarkshire, highlighting how vital the development of initial and transferable skills will be as we progress towards net zero emissions.


Scottish Labour will continue to engage with trade unions, businesses, local government, and the third sector to develop the plans for long-term climate action and the ‘Just Transition’ for workers.


“This summer has been another of record high temperatures, prolonged heatwaves, and extreme weather.  It is our duty to step up for global climate justice, and Scottish Labour’s climate policy addresses these obligations, while giving Scotland time to adapt in a just way for the workforce and communities.


“This policy recognises the huge inequality in Scotland’s current and historic greenhouse gas emissions, compared to other parts of the world.  The most catastrophic effects of climate change are impacting on the lives and environments of those who did the least to cause it, and this policy recognises greater ambition is needed for those at the front line of facing the effects of climate change.


“Inter-generational justice is also central to this policy.  We cannot push the job of tackling climate change onto the shoulders of the young.  We need interim targets of 56% by 2020, and 77% by 2030, to ensure we start to act now.


“Based on Scotland’s historical emissions since the Industrial Revolution, and per capita wealth, Scottish Labour has concluded we must hit net zero emissions by 2050, at the latest.


“The SNP Government’s draft Bill is far too timid, and ignored the 99% of consultation respondents who called for steeper targets.


“Scottish Labour has always led actions for fair economic transformation and social justice. Ambitious targets mean a clear signal to markets; giving confidence to businesses, investors, and communities. Action must now be spread fairly across all sectors and wider society.


“Scottish Labour will always be the party of the workers, and a statutory, long-term ‘Just Transition Commission’ must be in the Climate Change Bill to safeguard our communities and jobs against injustice.


“For the sake of those on the frontline of climate change around the world, for our beautiful planet, and for our children: no more complacency – now for real ambition.”


"When making decisions about targets for emissions and energy efficiency, we should start from the premise of making the best use of scarce resources and impacts on people.  Over a quarter of Scotland’s households are still living in fuel poverty – that's 650,000 homes – this is where our efforts need to be focused.


“Research suggests that the improvement of existing homes could support up to 6,500 jobs throughout Scotland over the next ten years, giving a much-needed boost to the Scottish economy.  BRE is working closely with New College Lanarkshire to support skills and training in this area.


"Poorly heated, damp and cold homes can pose significant health risks for people.  In the winter of 2016/17, an additional 2,720 people died during the winter months in Scotland, compared with the average for the rest of the year.  The World Health Organisation has in the past estimated that 30% of such deaths are attributable to cold homes.


“The BRE Innovation Park@Ravenscraig exists to test solutions to our ageing building stock – showcasing new ways of thinking about constructing new and retrofitting existing buildings, allowing innovative approaches to be tested in a safe environment. Our research shows that better, warmer, safer homes not only promote better quality of life for people but could also save the NHS in Scotland around £60m per year.”

Posted by UNISON Scotland at 11:39 No comments:

In this year’s Spring Statement, the Chancellor had an opportunity to address the devastating impact of eight years of austerity on public services. However, he rejected calls to announce the end of austerity. In Scotland, Ruth Davidson hailed the budget as a ‘win’ for her MPs.

Some argue that the Conservatives' historic strength has been their adaptability. Depending on circumstance, they have been Europhile and Eurosceptic, statist and laissez-faire, isolationist and interventionist. The challenge in Scotland, is trying to convince us they support better public services while saying nothing about austerity. 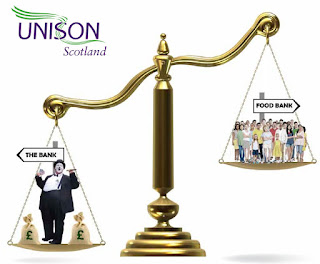 My local Tory MSP’s newsletter is full of his campaigns to get the Scottish Government and the local council to improve various local services. More should be spent on this, that or another public service. Absolutely right, but you won’t find a similar plea for the Chancellor to end austerity, the underlying cause of all these spending cuts.

The Scottish Conservatives at a national level are not exempt from this double-speak. I have gone back through their press releases over the past six months.

There are numerous calls for more spending on NHS Scotland. Spending on mental health services, particularly services for children, is apparently inadequate. So is spending on GP services, A&E departments, doctor training, smoking cessation, care of veterans, ambulances, drug and alcohol services, cancer services and various drug treatments. Not to mention complaining about bed cuts in several hospitals. Thanking our members for their efforts during the 70th anniversary celebrations is all well and good, but ending austerity funding would be even better.

Local government is also underfunded according to the Scottish Conservatives. It is, but austerity isn’t going to pay for their £100m ‘pothole fund’, or stop councils having to dig into their reserves, as the Tories have helpfully highlighted! It is also somewhat less than credible to argue for a cut in business rates and complain about Council tax increases – all of which would add to council cuts.

In education, they have complained about falling teacher numbers, cuts in FE colleges, while also asking for extra spending on textbooks. They want to ensure that foundation apprenticeships are a part of every single Scottish school’s offer by 2020. They have also highlighted underfunding of the early years expansion, which although true, will not be solved under the austerity policies of their party.

There are regular press releases claiming the Scottish Government is ‘soft on crime’, calling for longer sentences without any understanding that prison spending is way above the European average and a huge wasteful burden on public spending. They attack community alternatives to prison that actually work and are more cost effective. They complain about police numbers falling and the fire service budget, but not about austerity.

Of course, the Scottish Government now has the powers to address austerity. However, the Scottish Conservatives haven’t urged them to do so, instead they have opposed tax increases for the better off. If parliament had voted for their tax policies, funding for public services would be cut by £335m.

I understand the de-toxification strategy and many of the press releases highlight legitimate concerns about public services. However, you cannot avoid the reality that services are stretched largely because of austerity. An unwillingness to say anything about that is simply hypocritical. Facing two ways might make a nice local leaflet, but it does nothing for political credibility.
Posted by Dave Watson at 14:18 No comments: