Health workers should be able to get on with their jobs free from harassment. UNISON’s latest UK wide survey shows that this is not the case.

Following on from the our report showing the violence that Scottish Ambulance Service staff experience at work this UK wide survey indicates that eight per cent of respondents have suffered sexual harassment in their workplace in the last two years.

Of those who had experiences harassment 31% said the harassment was frequent/regular and 12% stated that it occurred daily weekly. The vast majority (81%) were female. The types of behaviour they describe are:


Respondents also describe how this affects their own behaviour leading to workers:


Sadly while many talked about the harassment with other colleagues or friends and family 28% keep quiet about it. Only 23% spoke directly to the perpetrator. Respondents were concerned about formal reporting. Almost half (49%) felt that “nothing would be done”. Others (37%) were concerned about being “dismissed as oversensitive”. Almost a quarter (25%) feared retaliation from the perpetrator and 22% feared that formal reporting could harm their career. Of those who did report harassment only 15% felt that their case was handled properly

Quotes from respondents include:

“One of my team ‘upskirted’ a colleague, then sent the video recording to another member in
the team by ‘accident’.”

“A colleague touched my groin during handovers to ‘show’ where a patient had pain. The
same person also touched around my side to ‘search’ for keys that I had in my pocket.”

“I work in a control centre and regularly get sexually based comments from patients.”

“While I was on placement a patient attempted to take my tunic off, but none of the staff on
the ward did anything.”

“I left the organisation. The nurse who made me feel uncomfortable made things awkward
and I hated working on the same days as her.”

“I suffered with severe anxiety, and couldn't be left alone at work. This went on for 12
months even though reported it to a manager.”

“As a result of my experience, I am now more wary about treating patients that are
intoxicated or under the influence.”

“It was an incident that spooked me. I now purposely wear a larger uniform and feel myself
tense up if we're called to the area where the patient lives.”

“It makes me feel nervous and panicked every time I see that member of staff.”

Joining a trade union will ensure that individuals are supported if they experience harassment but employers need to be proactive. The government can also drive improvement through reforms including:

• Reinstatement of section 40 of the Equality Act which ensured staff were safeguarded against harassment by third parties (for example, patients and their friends or relatives). Under this clause, employers were liable if they failed to act after two incidents. However, the government scrapped this ‘three-strikes’ rule in October

2013 on the grounds that other laws gave staff similar protection, a claim disputed by UNISON


• The creation by the NHS of a ‘gold standard’ complaints procedure that's robust and gives workers confidence that their case will be properly considered. Having good complaints procedures will increase the number of staff who report an issue and will create an expectation that complaints will be taken seriously
Posted by Kay S at 11:54 No comments:

Their latest report states that colleges are “operating within and increasingly tight financial environment”. The sector wide position is challenging but viewing it from that perspective is also masking the sever challenges in some colleges. Twelve colleges are predicting a recurring financial deficits by 2022-23. 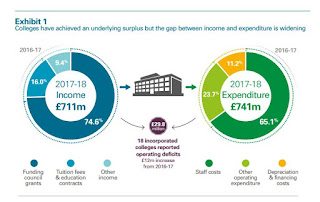 While the government can claim to have given colleges some extra cash, this was funding to cover the additional costs of harmonising pay and conditions across the sector following the recent reorganisation of the sector. This does not cover cost of living increases for staff or the extra employer pension costs.

There are also shortages in the capital budget compared to the estimated maintenance costs and the proportion of non-government income generated by colleges is reducing.

The sector continues to change with increasing student numbers. Colleges are changing focus with more learning being provided for over 25s and less for those aged 16-24. The proportion of learning delivered to those from deprived areas has begun to fall after several years on increasing.

While there is considerable variation across colleges for attainment and retention and those going on to so-called positive destinations. Average rates have been relatively static. The attainment rate of 66% for full-time students is still well below the Scottish Funding Council (SFC)  target of 75% by 20-21. There is still an attainment gap for students from the most deprived backgrounds and those with disabilities or who are care experienced.

Audit Scotland is calling on colleges to “underlying financial position with the SFC prior to publishing their accounts and improve data collection round student satisfaction as well as publishing that data. They also call on the government to agree a medium term capital investment strategy for ten sector and review college targets in the light of current trends.

Most importantly they call on government and colleges to work together to deliver performance improvement and therefore meet agreed targets.
Posted by Kay S at 16:27 No comments: