The Scottish Conservative’s obsession with police numbers misunderstands the importance of getting the right skill mix in a modern police force. For a party that claims to be concerned about efficiency for the taxpayer, it also ignores the statutory duty of Best Value.

Saturday’s Scotsman ran a story on the pressure Scottish Tories are putting on the Justice Minister to set out how Police Scotland will ‘cope’ with a reduction in frontline staff. The irony of this question is that ‘frontline staff’ have been reducing because of the policy the Scottish Tories pushed the SNP into adopting. Tory austerity cuts on the Scottish budget have also impacted on the Police Scotland budget and police officers have been backfilling police civilian staff posts.

No one has been more critical of this daft SNP policy than UNISON Scotland. However, we welcomed the absence of a commitment to police officer numbers in this year’s SNP manifesto. If we look at the actual answer given by the Justice Minister, it is a broadly sensible response. He said:

“As at 30 June 2016, there were 17,242 full time equivalent police officers in Scotland – 1,008 more than on 31 March 2007. The Scottish Government budget for 2016-17 made a commitment to retain police officer numbers at 1,000 higher than in 2007 while at the same time working with the Scottish Police Authority (SPA) to consider the implications of changing demands on Scottish policing. That work is currently on-going and no conclusions have been reached on implications for the future shape and size of the police workforce. We are committed to ensuring that the police have more specialists, such as experts in cyber-crime and counter-fraud and that the service has the right mix and numbers of staff for the future.”

Why is this largely sensible?

Firstly, it is a statutory duty on Police Scotland and the SPA to adopt Best Value principles. In this briefing we set out what this means. What it doesn’t mean is continuing to take police officers off operational duties to replace specialist, properly trained, police civilian staff – at typically twice the cost.

Secondly, a modern police force needs more specialists to cope with new forms of crime, as the Justice Minister’s response indicates. This was highlighted in Saturday’s Guardian, which reported that the volume of cybercrime now matches the number of traditional crimes. It is estimated that the £193bn cost is far in excess of the value of physical goods nicked from homes, cars and workplaces. Yet we devote relatively few resources to fighting it.

Thirdly, a key recommendation from the Christie Commission on public service reform was a shift to outcomes. Specifying staff targets is an input that does not directly link to the necessary outcome. Political parties are still wedded to grand statements about inputs in their manifestos. They, and we the public need, to be weaned off this populist approach to policymaking because it doesn’t deliver better public services.

The establishment of Police Scotland was a missed opportunity to dump the police officer number target. Sadly, it wasn’t taken. With the police budget heading for a £21m overspend, we simply can’t continue to waste resources by putting square pegs in round holes. A modern police force needs a balanced workforce – not outdated rhetoric on staffing targets. 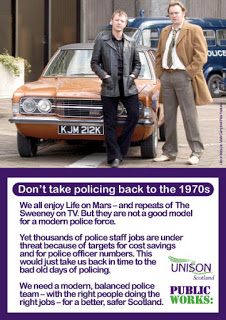 Email ThisBlogThis!Share to TwitterShare to FacebookShare to Pinterest
Labels: Police