Better to invest in public services

A couple of news stories this week illustrate all to clearly why it's better to invest in public services than roll back the state as the Tories are doing.

Today we have the Prime Minister telling us, "Whatever money is needed, we will spend it”, as another 1000 homes are evacuated. UK Ministers fall over themselves to blame anybody other than themselves for their inadequate response. But the real lesson is not emergency responses, but rather why are we not investing in the services needed to prevent problems like this.

As the PM himself said today, "We are a wealthy country”. Tell that to his climate change denying Chancellor.

Our television screens have been full of communities pulling together in an effort to help themselves. However, the relief on one person's face when the public services arrived was all too clear. A wide range of public service staff have been working beyond the call of duty to help their local communities. The problem is, that if the Tories get their way and roll back the state, those staff may not be there next time. 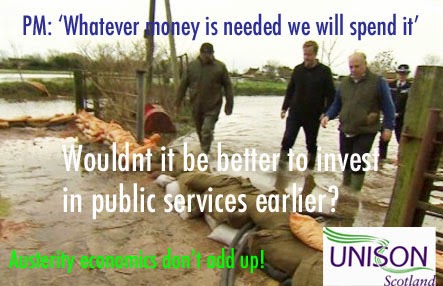 Another story illustrates, on a more mundane level, a similar failure to invest. In what is becoming an annual story, Scottish councils spend £1600 a day compensating car owners for the damage caused by pot holes that they don’t have the funding to repair. Rather than compensating, we should be investing in council services. This is particularly true this week as many councils cut their budgets as a consequence of the latest government grant cuts. 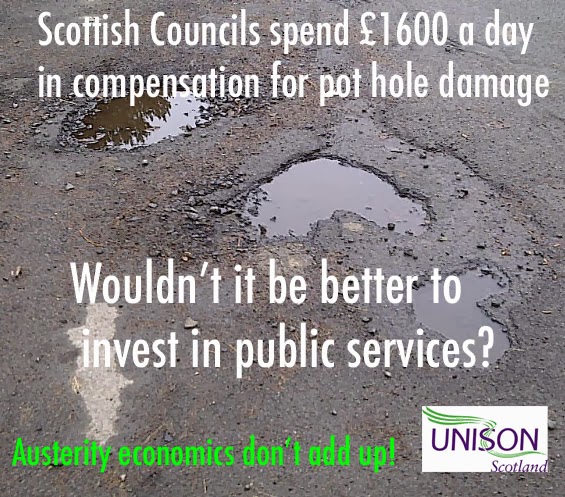 The key lesson from these stories is that austerity economics don’t add up. Good quality public services and preventative spending makes economic sense.
Posted by Dave Watson at 10:43