Today’s Audit Scotland’s report on the public sector workforce shows clearly how it’s the workforce that have taken the brunt of spending cuts.

26,600 whole time equivalent (WTE) posts were cut between March 2009 and March 2013 (7%). Some 9,665 were transferred to arms length bodies outside the public sector. 15,816 WTE left through early departure schemes, although these have been reducing in recent years.  Councils made the biggest reduction (10%) while the NHS had the smallest cut (1%).

The report, if anything, understates the picture because the numbers are converted into WTE. In terms of real people (headcount), 48,700 have gone (excluding the financial sector) since the height of public sector employment just before the financial crash - 5,500 people in the last year alone.

Given the scale of early departure schemes it might be expected that the numbers of older staff would be reducing. However, the report shows that the only age group that is increasing is 50-59yrs, up by 5%. Probably due to recruitment freezes the numbers of younger workers are falling. The chart below illustrates this change. 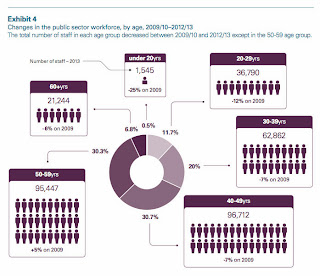 The report sets out the range of methods used by public bodies to reduce workforce costs with pay restrictions, vacancy management and early retirement the most common. More than a third of councils used compulsory redundancy. There is some criticism of the level of evaluation of early departure schemes.

Future workforce changes are inevitable given the budget cuts to come. The report outlines a range of ways this might be achieved, including considering service delivery cuts. The report recommends better national and local workforce planning.

Overall, the report is a useful description of what has happened to the public service workforce in Scotland. The recommendations are largely sensible, but little more than a sticking plaster over the impact of spending cuts to come.
Posted by Dave Watson at 06:00